will be fondly remembered by his Church Family and by all the boys he mentored in our boys Brigade.. His funeral takes place on February 25th at Rowley Crematorium but we'll welcome him back to Hasbury Methodist Church at around 1.15 before he leaves on his final journey 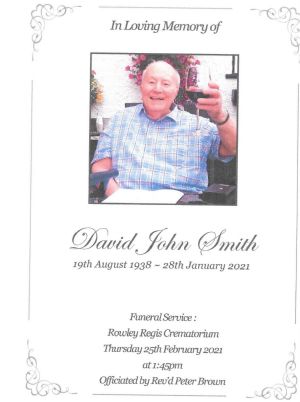 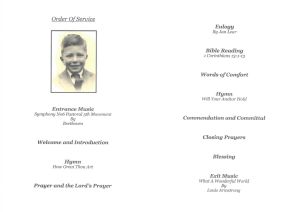 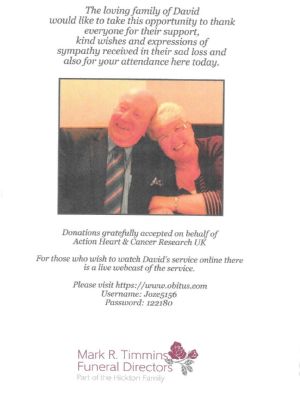 David was born in Erdington on the 19th August 1938.
The outbreak of war meant times were hard and David’s parents Ernest and Eve opened up the family home
so that he,and his older sister Doreen could share their home with their cousins Jasmine and Diane.

Family holidays were spent in Chipping Ongar, where David spent many happy hours working with wood
in the workshop with his grandfather, a shoemaker.
He also spent time with family friends in Southend on Sea where David was put to work on the beach
collecting money for deckchair hire.

Aged 7yrs, David was to face a great challenge when he became infected with polio.

weakness in one arm which he never allowed to limit his life. He was home schooled

in 1950 followed by Handsworth Technical School, working hard to catch up.

with industrial training at Wilmot Breedon.
In 1961 he was very proud to be presented with the Apprentice of the Year award by Sir John Hunt,
leader of the 1953 Everest expedition.

He continued working at Wilmot Breedon, gaining a BSc Degree in Engineering and left in 1970 to take up employment
at W.Canning Engineers. In a variety of roles David travelled to various countries such as Poland and Czech Republic.
He remained there until his retirement in 2002.

to Germany to visit his pen-friend Peter. Two young ladies, Madge and her friend also

travelling to Germany stole his seat on the train. This encounter ended with an

invitation back to a student house party at David’s home in Erdington and a loving relationship that lasted 58yrs.

time. Even the Thames was partly frozen on their London honeymoon.

Their first house in Great Barr was a new build requiring a lot of work keeping them busy until children came along
- Allison in 1967 and Stephen in 1968. David was a proud father and full of praise for his children’s achievements.
He was always on hand to guide and support them as they travelled through their lives.

Throughout his life David enjoyed working with youth organisations and the church.
As a young boy in 1949 he became a Scout Wolf Cub based at Gravelly Hill Methodist Church.
Later he joined the National Federation of Boys Clubs where he and a small group of friends began a youth group in Balsall Heath. Together they decorated an old church and built a coffee bar to encourage local disadvantaged young people to gather, have fun and share new experiences.

where he gave a speech on the Declaration of Human Rights and Responsibilities,

demonstrating a strong sense of justice and Christian values.

volunteering to help the 4th Halesowen Boys Brigade. In 1981 he became an officer.

became Captain. During those years David was happiest guiding D of E expeditions,

supervising camps and helping boys with badge work. He built up strong relationships

with boys, officers and helpers that lasted many years.
David’s knowledge was extensive and he was always ready to help and share his experiences with all he met – young and old alike.

a regular volunteer at the annual summer holiday club. However the highlight of the

year was always the role of Father Christmas at the church Toddler Group and Junior Church.
A bit of fun and an experience he always treasured.

skills he had gained as a child. He has created intricate marquetry pictures and

crafted pieces such as bowls and clocks, finding companionship among like minded

enjoyed walking with his friend John. Together they had many adventures including

wearing hiking boots into the canal at Stourport.

France, Joe and Hannah in Sheffield who he loved dearly. Although there were many

miles between them he would not miss an opportunity to spend time with them,

enjoying their company and always having some fun. He would be very sad that his

appreciate the technology that allows them to share with us at a distance.

possible. He has found great strength and comfort in the support of his Christian

faith and friends at church.

Many have said that David was a true gentleman, in French “Un gentile homme”, a kind, well mannered man who’s acts were full of consideration and thoughtfulness for others.

May we be thankful for his journey in life and all he achieved. May his memory rest with us all.