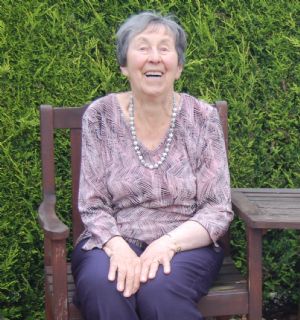 Her family are thankful to all who shared in the celebration of Jean's life. Because many of us were unable to be there in person they have kindly given permission for us to reproduce the order-of-service here.

donations in memory of Jean can be sent to B Ince Funeral Directors, Bank House, Bewdley DY12 2DX

and will be forwarded to Guide Dogs for the Blind

The day thou gavest, Lord, is ended,

The darkness falls at thy behest;

To thee our morning hymns ascended,

Thy praise shall sanctify our rest.

We thank thee that thy church unsleeping,

While earth rolls onward into light,

Through all the world her watch is keeping,

And rests not now by day or night.

As o'er each continent and island

The dawn leads on another day,

The voice of prayer is never silent,

Nor dies the strain of praise away.

The sun that bids us rest is waking

Our brethren 'neath the western sky,

And hour by hour fresh lips are making

Thy wondrous doings heard on high.

So be it, Lord; thy throne shall never,

Thy kingdom stands, and grows for ever,

Till all thy creatures own thy sway.

Dear Lord and Father of mankind,

Reclothe us in our rightful mind;

In purer lives thy service find,

Beside the Syrian sea

The gracious calling of the Lord,

Let us, let them, without a word

O calm of hills above,

The silence of eternity,

With that deep hush subduing all

Our words and works that drown

The tender whisper of thy call,

As noiseless let thy blessings fall

As fell thy manna down.

Drop thy still dews of quietness,

Till all our strivings cease;

Take from our souls the strain and stress,

And let our ordered lives confess

The beauty of thy peace.

Breathe through the heats of our desire

Thy coolness and thy balm;

Speak through the earthquake, wind, and fire,

A time for personal Reflection and Prayer

Death is nothing at all

Death is nothing at all.
It does not count.
I have only slipped away into the next room.
Nothing has happened.

Everything remains exactly as it was.
I am I, and you are you,
and the old life that we lived so fondly together is untouched, unchanged.
Whatever we were to each other,that we are still.

Call me by the old familiar name.
Speak of me in the easy way which you always used.
Put no difference into your tone.
Wear no forced air of solemnity or sorrow.

Laugh as we always laughed at the little jokes that we enjoyed together.
Play, smile, think of me, pray for me.
Let my name be ever the household word that it always was.
Let it be spoken without an effort, without the ghost of a shadow upon it.

Life means all that it ever meant.
It is the same as it ever was.
There is absolute and unbroken continuity.
What is this death but a negligible accident?

Why should I be out of mind because I am out of sight?
I am but waiting for you, for an interval,
somewhere very near,
just round the corner.

All is well.
Nothing is hurt; nothing is lost.
One brief moment and all will be as it was before.
How we shall laugh at the trouble of parting when we meet again!

Canon and Gigue in D 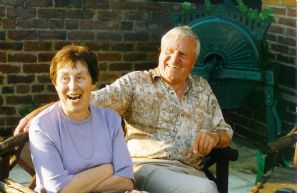 A refection on Jean’s life, kindly sent to us by Harry Page who conducted the funeral service.

As I said earlier, Jean chose the hymns and that reading especially for us today. I must admit that I did try to persuade her to have a different reading, maybe something from the Gospels or even Revelations. She was adamant, as she so often was, that this was the reading for her. On the face of it, it is a simple message. There is a time and season for everything. As anyone who has tried to study the bible will know, every passage is like an onion – peel off one layer and there is another one underneath. I have thought about this for quite a while and become convinced that in this reading is a message that Jean stood by for all her life. Cutting to the chase now I think I can reveal that message. Simply, be in awe of God as everything in your life is by his command. She knew that there would always be opposites of every situation, there would be good times and bad times, but by following God’s will you will always get through. You will have a good life.

Well, as Jean would say I think that is a sufficiency of theology for now.

Looking at Jean’s life, in many ways she was like that onion. Peel away a layer and there is another one right beneath it. She certainly knew about the seasons, her love of her garden and nature was something that gave her great joy and interest. Her whole life can be divided into the four seasons.

Born on 28th March 1924 in Blackheath was the beginning of the spring of her life. Her first school was Beeches Road Infants where she passed intermediate exams to go on to Rowley Regis Central School where she gained the equivalent of today’s GCSEs. Nowadays we would not understand her Father’s attitude that she was a girl, and education was not for girls. It must be obvious to everyone who knew her that with her intellect she could have gone on to achieve great things educationally. This was not to be. Maybe that was what drove her quest for knowledge for the next 90 years. She left school at 14 and went to train as a comptometer operator, something that she did not enjoy. Jean went on to work at Edwin Danks where she calculated the weight of steel bars using a comptometer, a job that she found most uninteresting. I think I can see why! During the war her occupation was protected and she worked on something called the PLUTO project. I don’t think she was an astronaut, although I am sure she could have been. Pluto stands for pipeline under the sea, something that was being laid as part of the war effort to get fuel over to France for our troops transport. That was her time for war, soon to be followed by a time for peace, something our generation should be grateful for and respect her for. She was one of the many that built this country after the turmoil of world war, and ensured our peace and prosperity.

In her springtime she loved to cycle, often riding with her friend Margaret as far as the Wye Valley. It was on a cycle ride that she met her husband to be. Whilst cycling from Clent to Gorsty Hill a dashing, newly demobbed Vic just happened to be passing and offered to give the young ladies a push up the hill. This was the start of the summer of her life. The romance blossomed and they married in 1949. Setting up home together in Astley Crescent Quinton in a house they referred to as “the den”. They became a family when Trish and Kevin were born, the children adding to their joy and gave them much pleasure. As the family grew, they moved on to Lutley Lane. Working together, as always, to improve and make it a better home. Her love of travel blossomed in this mid-summer of her life. The family holidays were taken in the UK and on the continent.

As the children grew up, she was able to spend more time in other interests. She pursued education, something that she had craved since her youth, taking examinations at O level in Geography and Sociology, then A level in French. She went to night school to study flower arranging and art classes and from that she became an accomplished artist in oils and watercolours. Jean studied pottery and woodwork during which she made a trolley, rubbing the sandpaper with a little too much enthusiasm that there was not much trolley to take home.

She worked in Market Research, served meals on wheels, volunteered at Citizens Advice, was a probation helper dealing with a lot of ladies of a certain age who had taken to shoplifting, she joined U3A and enjoyed their talks and visits. All these achievements she managed in the summer and autumn of her life. Jean and Vic loved to travel. They became quite the jet setters, visiting over 30 countries until Vic passed away in 2004.

This was the start of the winter of Jean’s life. In her 80s she walked on the great wall of China, and visited South Africa and Poland. These visits took her tally of countries visited to 34 she told us with pride. She carried on with many of her activities, keeping up with family and friends, adding to her social circle as she went along. She made many friends at Hasbury Methodist Church and widened her activities through the exercise group, the open-door group, the lunch group and all the other church activities. She certainly made many friends in the mid-winter of her life. Her computer skills became known to many of her visitors, there was always something that would not go just right. Phone calls to me usually started” I can’t get it; I’ve got the egg timer but that is all”. I am sure that others got that same call. She was always a trier. In later days she became frustrated by not being able to do the physical things that she had always done. Her eyesight was failing along with her body, but she always believed that things would improve.

Trish and Kevin have had so many cards, letters, emails and calls to say how much they will miss her and her interesting conversations. After hearing this, what can only be a brief summary of her life, are you surprised that she was interesting?

I think it best if I skip over some of her other more entertaining quirks. Her jokes, family meals with her grandchildren were sometimes brought to a halt by Nana’s jokes. Often, she would get the punchline in the wrong place, but that only added to the quality of the joke. I only have to say “wheelie bin” now and they have to smile. I will say nothing about her driving, or about the police chase through Kidderminster and when the officer finally caught her, he could only say that he thought it was a youth driving that fast.

Winter finally caught up with Jean on a wet drab day in early July. She had known that her body was failing for some time. She said that she was ready to go, you will note that she did not say die. Her long held faith told her that at the end of life we all just move on to somewhere better, I am confident that she has.

A long and full life, a life of movement and journey, an ever-changing life that cannot be replaced.

And now Jean has given up her earthly body because she no longer has a need for it. And as promised to her by her steadfast faith she will see the very face of her God as she goes on to that new heaven and new earth. All her questions have now been answered.

She will, I am sure, be resting from her earthly journey, parts of which she must have, like we all do, struggled to come to terms with.

All of that is of no consequence now.

The old order of things have passed away, for Jean, everything is new.